The southwest in 2012 is one of the most aggrieved areas in 2012 and special cures are needed as this combination of flying stars is known as “Bull fight sha” and hard to control and you have to lessen its energy and for this you use a powerful combination of four protection Buddha’s known as a Si Bo Zhi which translate into four Buddha’s of protection and because this cure is essential in 2012 we have included it in all our 2012 cures and enhancers kit.

To remedy its effects use red decorative objects, candles, lamps and lights. A nice easy cure is a red, pink, purple, burgundy floor mat or a table lamp with a red shade.

Do not use metal to control this energy as you will aggravate it, limiting the helpful effect from favourable monthly stars in certain months and expand its undesirable effect.

The influence of a Chen 3 in Period 8 denotes possible quarrels, disparity, back stabbing and can result in lawsuits, either as a petitioner or a defendant and could cause loss of wealth.

Either way there will be a loss of time, energy and wealth, so please be careful during 2012 especially if you have a main door in the southwest and if you can, try and use another door to enter and leave.

You should also hang a Ba Gua mirror with a Chinese i-ching coin on the rear for added protection in 2012. The reason why it is very bad in 2012 is because when the #3 star flies into the southwest Kun palace which is an earth element.

An imperative cure in 2012 to protect against legal issues, gossip and loss of wealth is called a four protection Buddha’s known as a Si Bo Zhi which translate into four Buddha’s of protection and creation cure and because this cure is essential in 2012 we have included it in all our 2012 cures and enhancers kit.

• Place a light in the southwest if you have a choice, a lamp with a wooden stand and a peach/red shade is better.

• Do not hang wind chimes of any material in the southwest in 2012, especially metal wind chimes as it will worsen matters. If you have been advised by a professional Feng Shui consultant this is fine.

• During hot summer months, make sure the fan is not located in the southwest.

• Take extra security measures for the whole home or business during 2012 and check smoke alarms.

• Check through everything before signing documents if office or other important room is in the southwest.

• Try and keep this area quiet and do not disturb with loud noises.

• Invest in a good compass and avoid placing machines like a TV, fan, fax machine, computer or any machines that creates noise or vibration in the southwest of any room.

Please click on the the relevant area to find out more about the Flying star for 2012. 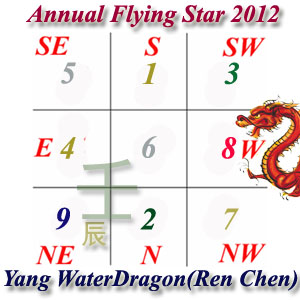