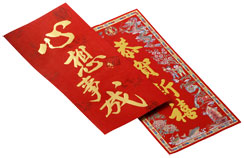 Ang Pow red envelopes have many names but are mostly referred to as “Ang Pow” “red packets” “lai see” “laisee” “hung bao” or “hung-bao”. These beautiful red envelopes are considered very lucky when given as a gift and are seen as even more good luck when they contain cash. The main use of red envelopes is for Chinese New Year, birthdays, weddings or any other important event where you would give money and a very auspicious gift to receive is a red envelope with a single auspicious Chinese i-ching coins inside and even better if the coin comes from a good dynasty and this is the free gift we give with all our orders and something we have done for twelve years now.

The colourful appearance on the front of an Ang Pow is designed to represent good wishes of long life, success, wealth and good health.  They will always be associated with images with auspicious meanings such as carps swimming amongst flowering lotus, the fabled creatures of dragon and phoenix, Chinese zodiac animals, peonies in full bloom, the three immortals, golden pineapples, Buddha’s and children.

We personally select every design as the quality and presentation is very important. Over the years, these envelopes have become commercialised and we have found many custom made envelopes containing negative images from company logos embedded in the image at the front of the envelope; although harmless, this can have the opposite effect to a traditional Ang Pow.

You should never use a white envelope to put money in as a gift as you will face the bitterness of the receiver and considered very bad form in Chinese culture.

When you receive money to help cover funeral costs; this is called “Pak Kum” which is when money for the family of the departed is bequeathed for a family that not be well off. So if you ever come across a Chinese client, think twice before giving them their fee in a white envelope as this could offend them although this is less likely in our western countries nowadays. 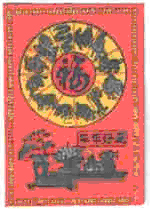 The story of red envelopes.

The story of “ang pow” dates back to the Sung Dynasty. A village called Chang-Chieu was at the time, being threatened by a demon. Nobody in the village was capable of defeating the demon, not even their greatest soldiers could defeat him. However, a young boy armed with a enchanted sword that he had inherited from his Father, fought the evil monster and killed it. The villagers were victorious and they presented the brave young boy with a red envelope/pouch bursting with money for his courage in saving them all from the demon and from then onwards, the ang pow has become a part of traditional Chinese customs. 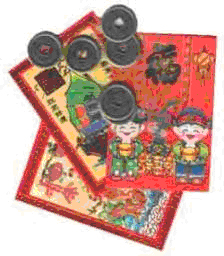 The amount that should be given in an Ang Pow all depends on your personal financial circumstances. If you are giving red envelopes to children for the Chinese New Year, age will be an significant influence.

Usually as you get older, you tend to receive a bit more each year. For a 5 year old child, £2 GBP (about $4 USD) will be fine. The amount contained has to be in even numbers. Even numbers are considered auspicious and odd numbers are seen as denoting loneliness although I must admit the figures involved in most Chinese homes is very high and it is not uncommon for a 5 year old to receive £100 cash and even greater amounts are not unusual as it becomes very competitive.

As a child I used to get very excited as I would earn myself a small fortune!

Giving red packages to employees before the New Year is also very common and practised in most Asian countries.

When are Ang Pows given?

Even though the tradition of giving and receiving red envelopes is centuries old, it is still as popular as it ever has been! During Chinese New Year, they are given by married couples to small children, teenagers and unmarried adults although my parents give red envelopes weekly when they pay for services or send cheques as it is supposed to increase the luck for the receiver.

There are no hard and fast rules and they can be given at any time of the year and do not just have to be given on a special occasion. It is recommended that you use some of the money you receive to try and pay some debt off if you have any. You should always leave a small even amount of money inside the red envelope and place it in your purse, handbag or wallet and this is one of the reasons why we give these as a free gift when placing an order with us whilst you have given us money we in turn give you some back to keep in your purse or wallet.

It is traditional and usual to give a red envelope to parents when their baby celebrates their first month of life. The parents will, in return, distribute to well-wishers, gifts like red dyed eggs, yellow rice with curry chicken or bean cakes. Money is also given as a birthday gift for people of all age groups. The elderly also give gifts of money to their younger generation when they celebrate events like their 60th birthday for example.